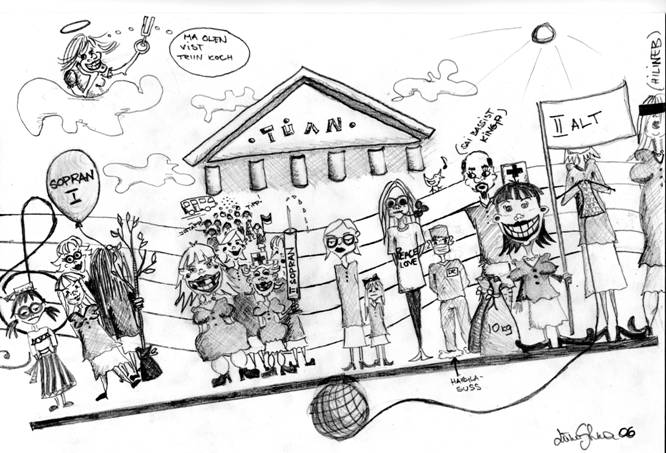 Autumn singing camp. Two days away from Tartu, somewhere nice in Estonia. A lot of singing practice, among which we find time to initiate the freshly accepted new singers. In addition, every new recruit gets a choir mother in the form of an elder singer who will help them get a foothold in everything related to the choir life.

Voice group evenings. Choir practice is foremost for singing and not for chatting. For people to know to say ‘Hi’ to each other when they meet on the street and to talk about more than just the weather, we have regular voice group evenings. In a nutshell, these are cozy and lively get-togethers in a freely chosen place at a freely chosen time (excl. the rehearsals) one voice group at a time. A female choir also means social life and it is far safer to sing on stage with a team of women than with a group of strangers.

Christmas concert with the Tartu Academic Male Choir (TAM). Forces are joined during Christmas and a lovely concert by the two choirs has become a regular musical event every year in December for a lot of the people of Tartu.

Christmas party with TAM. So the concert has ended but that won’t stop Father Christmas from coming! To welcome him honorably, the two choirs alter the reality on this evening and dance together with a snowstorm a nice snowy road to Tartu so Santa’s sleigh would fly on the road. Christmas party is always organised by 2 voice groups – one from TÜAN and one from TAM, and is always very stylish, for why partying if not costume partying?

Birthday of the Women’s Choir. The Women’s Choir was born on the 3rd of March 1945. So it is already old enough that no birthdays can be skipped. Thus, at the beginning of March, both the younger and the “more mature” singers come together, sing a good rehearsal full of songs, take time off and peek into the past, the present and the future.

Participating in the Song Celebrations. One of the most solid and emotional events the Women’s Choir takes part in. Undisputably a celebration of all celebrations for every choir singer. Several days full of singing, being together with your comrades, jokes, laughter, the thunder and sun of the Estonian sky and the sheer joy of being Estonian. TÜAN always ends the Song Celebrations at their rock, giving thanks to each other and singing the motto.